Recent events in schools across the US have been plagued with a series of violent events.  In eighteen years, there have been 130 shootings in K-12 and another 58 at colleges and universities (link).    There are approximately 132,656 schools in the United States as of the publishing of this article.  That means that 0.1% of the schools have dealt with gun violence.

The reactions to the violence have seen both moderate and extreme voices rise up.  As an educator, I won’t debate the issue of the second amendment or the laws. The response to installing metal detectors in every school seems a bit extreme once you consider everything involved.  So if the average school has 5-6 exits (for Fire Code) and three of them have metal detectors, that means having an SRO (Student Resource Officer) present at every entry. On my campus, we already have two officers (due to size of campus: 3000 students).  That would mean adding another SRO salary, plus detector cost. Students would have to line up single file to go through the detectors one-at-a-time, which would take forever (been to an airport lately?). Schools are supposed to be places of future mindsets.  Teaching children to be afraid and to go through metal detectors or pat-downs on a daily basis seems like we are setting up 99.9% of our children to be unsuccessful without the need of police action. While all of this discomfort seems acceptable for the safety of our children, the simple fact is, if a child really wants to bring a gun on campus, they will find a way.  So what is the solution?

It just so happens I did have a bit of an epiphany this morning on my drive into work based on what we can change.  When I was a student 30 some odd years ago, if there was a fire in the school, a teacher was to call the front office and they would initiate an immediate evacuation of the building.  Now in our schools, we have fire alarms sprinkled liberally throughout the building. The students have been trained that if there is a fire to pull it. If there is not a fire and it is pulled, severe consequences will occur (even legal in some cases).  This change came about to help with the efficiency of fire reporting and to identify which part of a building a fire was located first. Schools also have automated defibrillators (AED), fire extinguishers, and so forth spread out as well.

What if we had sprinkled throughout the buildings instead, Safety Stations.  These stations would be a great place to locate an AED, fire extinguisher, and fire alarm; all already in place on most campuses.  We could then add two important items. The first would be a phone with direct connections to first responders (Nurse, SRO, Front Office, 911, etc.).  The second would be a panic button for lockdown. Most schools already have a button to initiate lockdown, but like the fire alarms of 30 years ago, they are only located in the front office.  If we put these items in one location with mounted instructions for use and penalties for misuse, could we save lives more efficiently? 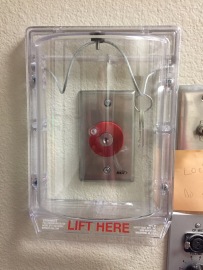 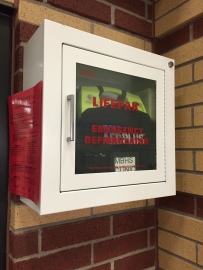 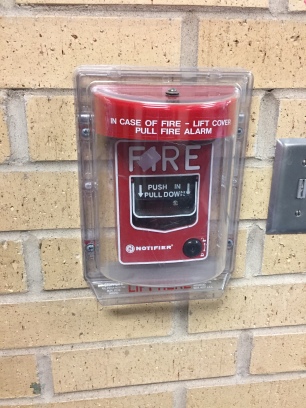